Shauzia stood there for a moment feeling awkward that she’d hurt the woman’s feelings, and angry that the woman had made her get up just when she had gotten comfortable.

Finally, since she didn’t know what to do with either her awkwardness or her anger, she just walked away, and Jasper went with her.

The woman had scared her. If someone who had been to university was reduced to begging, what hope did Shauzia have? She knelt down beside Jasper and pretended to fuss with his leash. She kept her head low so no one could see her crying. “I don’t like it here,” she whispered. Jasper licked at her tears. Shauzia hugged him close. Then she stood up and kept walking. 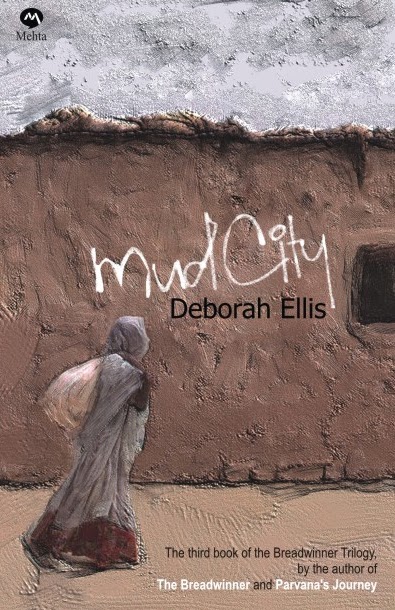 There were a lot of beggars in the market. Some were women, covered and uncovered. Some were sick people with twisted limbs. Others were children her age. People walked past the beggars’ outstretched hands as if they were invisible.

“The people they’re begging from look as poor as they are,” Shauzia said. She turned away. It was all too awful to watch. They walked through the market again. I’ve got to ask someone for a job, she thought, but each time she got close to approaching a shopkeeper, she felt too shy to do it.

“You can’t possibly manage on your own,” Mrs. Weera had said. Shauzia remembered how everyone had laughed. She took a deep breath and headed to the nearest shop, a bookstall.

“Give me a job!” she demanded of the man behind the stack of books.

She was quickly ordered out of that shop, and away from the four other shops she went to.

The day slipped away. The market stayed open after dark, but the bare lightbulbs hanging here and there from poles and wires created weird, frightening shadows in the streets. Shauzia and Jasper squeezed themselves into an alcove between shops. She could tell from the smell that they were sharing the space with decomposing fruit and other garbage, but at least they were out of the way of people, cars and shadows. She leaned against the wall, missed Mrs. Weera’s snoring, and fell asleep sitting up.

Shauzia woke to a gray predawn morning, her head pillowed on a pile of rotting cabbage. Jasper was already awake, chewing on something he had found in the garbage. She got up and they went to a water tap she’d seen in the market. She threw water on her face, and she and Jasper had long drinks. The water filled up her belly – for a while. She spent the day looking for work. Many of the  shopkeepers told her she was too dirty to work in their shops. Others already had all the help they needed.

The sun was starting to go down when she passed a butcher shop, almost empty of meat, full of dirt and dried blood. “Your shop needs cleaning,” she said to the butcher, who was sitting on a stool just inside the doorway and drinking a cup of tea. “I could clean it.”

The butcher swallowed a mouthful of tea, looked her up and down and said, “This is a man’s job. You’re a small boy. Go away.”

Shauzia didn’t budge. “I can clean your shop,” she said again. She put her hands on her hips and stared right at him. She was hungry and tired and not in the mood for nonsense.
Posted by Mehta Publishing House at 16:04 No comments: