How Jess and Casey became friends

Excerpts from the book "TRUE BLUE" By Deborah Ellis

- To those who have the courage to be friends

I’m in grade three the first time I notice Casey. It’s the end of recess. The bell rings and we all line up, yelling and pushing. Except for Casey. She’s standing still, her hands cupped in front of her, holding a large green insect. 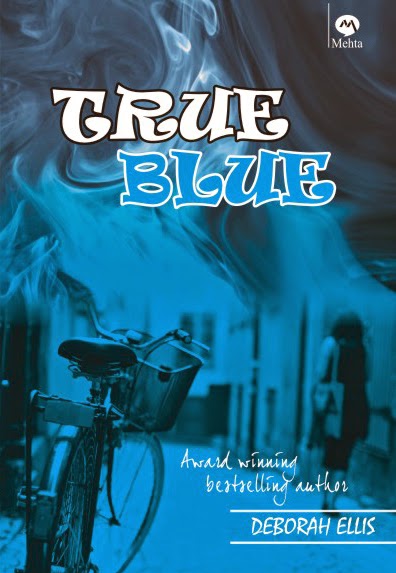 A lot of girls start to shriek, the way girls do. They run around, and then the boys run, and everyone scatters across the playground. I don’t run. I just watch. Ms. Thackeray has a hard time rounding them up again.

“That thing belongs on the playground,” she snarls at Casey.

“It’s a praying mantis,” Casey says. “I found it in the bushes.”

“Then you can just put it back in the bushes.”

Casey doesn’t ask. She just says. I’ve never heard a kid talk like that to an adult before. Not asking. Not whining. Just saying. As if what she wants is as important as what the teacher wants. Casey walks right past Ms. Thackeray and into the school. She makes it into the classroom before Ms. Thackeray catches up with her. The teacher grabs her arm and the praying mantis goes flying around the room. All the kids scream and carry on. The bug finally lands on Nathan Ivory’s desk. Nathan smashes it with a book. Casey shoves him so hard he skids across the floor, knocks his face into a bookshelf, and bloodies his nose. Casey tries to pick up the pieces of the insect. Ms. Thackeray drags her away to the principal’s office.

After that, kids start calling Casey the Praying Mantis. Casey loves it. And we become friends. She likes me because I don’t squeal like an idiot at the sight of a bug. I don’t love bugs like Casey does, but I don’t see any reason to get worked up about them. Casey doesn’t care that no one else wants to be my friend. And I like that she likes me.

Posted by Mehta Publishing House at 11:12